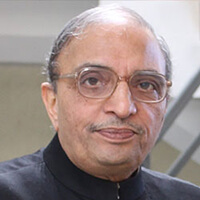 Dr. Deepak Phatak (born on April 02, 1948) eminent educationist, visionary and one of the key architects of the Akash Project obtained his Bachelor’s degree in Electrical Engineering from SGSITS Indore in 1969, and his M Tech and Ph. D from IIT Bombay. He has been serving with IIT Bombay since 1971 and has donned many roles in his illustrious career. He has been the founding head of Kanwal Rekhi School of IT from 1998 to 2002, the first Dean of Resources of the Institute from 1995 to 1998 and Head of the SJ Mehta School of Management from 2004 to 2005.

Dr. Phatak headed the CSE department of IIT Bombay from 1991 to 1994 and was Subrao M Nilekani Chair Professor from 2000 to 2013. He has been instrumental in starting an IT incubator to foster innovation through start-up companies. It has now evolved into SINE (Society for Innovation and Entrepreneurship), which is now considered as the best incubator in India.

Dr. Phatak started the country’s first interactive distance learning program using VSATs, which has now blossomed into the Centre for Distance Engineering Education (CDEEP). He set up the Affordable Solutions Lab (ASL) at IIT Bombay in 2000. He is regarded as the pioneer of smart card usage in financial transactions in India. He also led the way in development of low cost devices such as Smart Card Reader and Clicker devices. He was elected Fellow of the Computer Society of India in 1999, and Fellow of the Institution of Electronic and Telecommunications Engineers (IETE) in 2000. He has been the Chairman of the National Board of IT Education and Research of All India Council of Technical Education (AICTE). He has joined IIT Indore as Chairperson, Board of Governors. He is an Open Source evangelist in India, and has pioneered several initiatives to popularize Free and Open Source Software Usage.

In 1983-84, Dr. Phatak helped setting up the department of Computer Science in his Alma Mater SGSITS, and initiated the BE program in Computers. He spent subsequent summer at DAVV Indore, to set up the Computer Centre and to initiate the MCA program. After extensive travel across the country and numerous interactions with teachers and students, he felt the need to actively engage, guide and mentor the enormous talent existing in India. He has played a leading role in this through various initiatives like the Eklavya Project, T10KT (Train 10 Thousand Teachers at a time), Learner-centric MOOCs (Massive Open Online Courses) etc. His main focus at present is improvement of quality of education, at a large scale commensurate with the national aspiration.

As an expert in Databases and Information systems, he has been a consultant and advisor to a number of organizations and Ministries on various issues related to Information Technology. In the financial sector, he has been an IT advisor to SBI, RBI, UTI, IDBI, LIC, SEBI, NSDL, etc. He is a permanent invitee to the payment system Board of RBI, and also Chairs the IT committee of SEBI. He has served on the boards of several companies and institutions, including IDBI bank, UTIISL, Bank of Baroda, NIA, IGNOU and NIT Agartala. He currently serves on the Boards of HDFC AMC, ReBIT, IBPS, VJTI, etc.

Dr. Phatak is recipient of the ‘Excellence in Teaching’ award and the ‘Industrial Impact Research Award’ from IIT Bombay. He was conferred ‘Life Time Achievement Awards’ by Skotch foundation in 2003, by Data Quest in 2008, and by Dewang Mehta Business School Awards in 2010, by Interlop in 2014, by IIT Bombay in 2014 and by CSI in 2018. He was listed among fifty most influential Indians, by Business week in 2009. The President of India honored Dr. Deepak Phatak with Padma Shri (2013) in recognition of his exemplary services in Science and Technology. Dr. Phatak strongly believes that teaching cannot be just a profession, but has to be one’s Dharma. His dream is to see a resurgent India, catching up with the world and eventually leading the world.