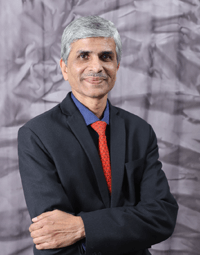 Mr. Vivek Sawant was the Managing Director of Maharashtra Knowledge Corporation Limited (MKCL) since its inception in 2001 to 2019. Under his leadership, MKCL has emerged as a high-tech initiative of the Government of Maharashtra and 10 universities in Maharashtra for development and delivery of Education, Governance and Empowerment technologies, solutions and services to masses.

In MKCL, he has successfully integrated a network of about 5000+ Authorized Learning Centers spanning over the Maharashtra state. This is the single largest private-public-partnership network of its kind in India. Over 1.25 Crore learners from metros to rural and tribal areas have taken a low-cost, high-quality IT Literacy eLearning experiences leading to MS-CIT certification through this network in last 16 years. This venture has provided employment and self-employment opportunities in the field of IT to about 25,000 youngsters in the state at their own native places.

Under his leadership, MKCL with its popular brands such as ERA, Digital University, OASIS, etc. has offered its Digital Empowerment services to more than 20 million (2 Crore) common people in several states of India as well as abroad. Today while MKCL has emerged as a self-sustaining, wealth creating and ever growing enterprise it is firmly committed to its social responsibility and social accountability.

Soon after completing his school and college education in Nasik and Post-Graduate education in Pune, Mr. Sawant served as a teacher of Physics, Electronics and Computer Science at the Fergusson College, Pune from 1979 to 1987 and as the Deputy Director of Symbiosis Institute of Computer Studies and Research from 1987 to 1988.

Later he participated in design and development of India’s first indigenous Supercomputers PARAM at C-DAC from 1988 to 2000. There he served in various leadership roles in the fields of:

During his tenure at C-DAC, he developed the nationwide network of 20 Advanced Computing Training Schools (ACTS). Under his leadership at ACTS, more than 25,000 engineering graduates from various disciplines were rigorously trained in software engineering and state-of-the-art software development tools and methodologies. All of them were placed in leading IT industries in India and abroad and are now serving in leadership roles all over the developed world.

Later he also served as the founder Director of International Institute of Information Technology at Rajiv Gandhi Infotech Park at Hinjawadi, Pune.

In order to ensure the success of citizen-centric eGovernance projects, Mr. Sawant strategically initiated IT Literacy campaign within the Government of Maharashtra from 1995 which today in the form of MKCL and MS-CIT has emerged as the largest IT Literacy movement in the world. It is widely recognized as the de-facto benchmark in IT Literacy and also the major step towards bridging the Digital Divide and resultant Knowledge Divide and Opportunity Divide in the semi-urban, rural, tribal and hilly areas of the state.

Mr. Sawant has served on several policy-formulation committees at state and national level including the Indian Prime Minister’s IT Task Force, National Rural Road Development Committee and National Board of Apprenticeship, State eGovernance Task Force of a few State Governments, etc. In view of his pioneering contribution in eGovernance of the PWD, he was invited to be the co-author of the Pradhan Mantri Gram Sadak Yojana under which 1.2 million (12 Lac) km nation-wide rural road network has been established.

He has served on Boards of Studies and Academic Councils of several universities.

He is an honorary fellow of Maharashtra Academy of Sciences.

He also offers his strategic contributions and voluntary services on the boards of trustees and advisory councils of many educational, social and voluntary organizations.

His research interests include:

Mr. Sawant has authored many articles and delivered lectures in these areas in English and Marathi in India and abroad.

Mr. Sawant has been felicitated by various awards for his distinguished contributions in the fields of education, high performance computing, entrepreneurship development, leadership development, innovations, etc. Some of the awards are –

He was also nominated for World Technology Network Award at San Francisco for his work of likely long-term significance in education.