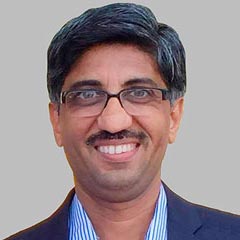 Prof. Abhay Karandikar is currently serving as the Director of IIT Kanpur. Earlier, he was the Dean (Faculty Affairs) and the Institute Chair Professor in the Department of Electrical Engineering at IIT Bombay. He has been instrumental in developing many pathbreaking technologies and has been at the forefront of several large initiatives both at the institute and the national level. He is the founding member and chairman of the Telecom Standards Development Society of India (TSDSI), India’s standards body for telecom. He has also served as the coordinator of Tata Teleservices IIT Bombay Center of Excellence in Telecommunications (TICET) and the National Center of Excellence in Technology for Internal Security.

Prof. Abhay Karandikar received his M.Tech. and then a Ph.D. in electrical engineering from IIT Kanpur in 1988 and 1994, respectively. Following it, he joined the high performance computing group of the Center for Development of Advanced Computing. In April 1997, he joined IIT Bombay as a faculty in the Department of Electrical Engineering and continues to be associated with the institute. Since then, he has held several administrative positions including Dean (Faculty Affairs), 2017-2018; Professor-in- charge, IIT Bombay Research Park, 2014-2017; Head of the Department, 2012-2015; and Head of the Computer Center, 2008-2011.

Prof. Karandikar has 20+ patents to his credit, papers in international journals, contributions to IEEE, 3GPP standards and contributed chapters in books. He has been an invited speaker in national and international forums. He has led 20+ sponsored research projects with industries and government funding agencies and served on numerous national committees as an expert member and advisor. Currently, he is working as a consultant to provide technical expertise in design and implementation of BharatNet, Government of India’s flagship initiative under Digital India program.