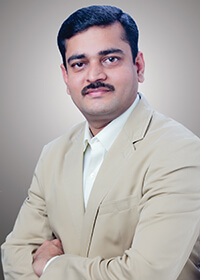 Mr. Anupam Narkhede started his career by establishing few computer training centers in a rural area of Jalgaon district in 2000 after completion of his Masters in Business Administration.

He has been associated with MS-CIT from the very first batch,when MSBTE was running it through Govt. ITI.

Later,he was associated with MKCL's Local Lead Center Jalgaon, Dhule and Nandurbar from 2002 to 2006.

Mr. Narkhede then appeared in MKCL's IDST course in Aug 2006 batch, based on his meritorious performance MKCL offered him a job and deputed him in MKCL's Branch office in Mumbai as a Business Analyst.

Since joining in MKCL he worked on some of themajor challenging projects in eGovernance. In 2007-09 he worked in MKCL's innovative Employment Assistance Services for Youth (EASY) project. During 2008 – 2010 he was closely working with 14 Power Generation Stations of Maharashtra State Power Generation Company (MSPGCL) totransform the manual tendering process with unique electronic tendering process across allthe power stations.

Since Jan 2009 MKCL's Secured eTendering System (SeTS) has beenutilized by all power stations of MSPGCL to process all forms of tenders. Now, MKCL's SeTS are implemented in Cooprative and in Educational Sector.Since 2011 he has been working on a challenging and complex Digital-MLS project, which willautomate all parliamentary businesses of assembly and council for Vidhan Bhavan,Maharashtra. In 2012 he was working on a Gram Panchayat Shashaktikaran Program held in Odisha whichsought more than 85 lacs unique projects for Govt. of Odisha to be completed till 2017.Based on his performance, innovative and sincere work he was promoted as Program Manager, Business Development Program in June 2012 and later he has been assigned withthe responsibility of Center Head of Branch Office CST Mumbai.At present he is working on some of really advanced projects which will help the largercommunity from Housing Societies, Gram Panchayats, Villagers at large in the upcoming days.