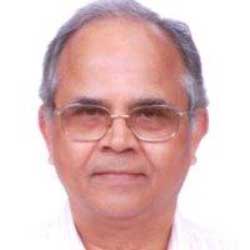 During the last three decades HBCSE has seen considerable growth both in quality and quantity. It has pioneered several new programmes, both of research and outreach, in science and mathematics education, and has received national as well as international recognition. As a close associate initially of HBCSE's founding Centre Director, Prof. V.G. Kulkarni and later of its next Centre Director Prof. Arvind Kumar, and subsequently as the Centre Director himself, Prof. Pradhan significantly contributed to HBCSE’s growth. He played a leadership role practically in all activities of HBCSE, not only in research and student talent nurture, but also in activities aimed at improvement of science and mathematics education for all, such as, teacher development, curricular and co-curricular material development, networking with educational institutions and science popularization.

As a leader of HBCSE’s teacher development as well as talent nurture efforts, Dr. Pradhan was instrumental in designing and implementing numerous innovative training programmes in science and mathematics for students and teachers and in networking with school systems. He also led HBCSE’s programme of developing higher secondary laboratories which contributed to India’s participation in Olympiads, the prestigious international subject competitions at the pre-university stage. He was chairperson (2008-2011) of the National Steering Committee which oversees the activities of science and astronomy Olympiads in the country. Widely traveled abroad, Dr.Pradhan represented India as a teacher leader for several international Olympiads and other such events. He was the teacher leader of the 29th International Physics Olympiad held in Iceland (1998), which was the first science Olympiad that India ever participated in. He was also the convener to several international events hosted by India, including the 2010 Asian Science Camp, Mumbai.

From July 2012 to June 2017, Dr. Pradhan was associated, as a Raja Ramanna Fellow of the Department of Atomic Energy, Govt. of India, with Homi Bhabha Centre for Science Education where he continued his science education work, and also with UM-DAE Centre for Excellence in Basic Sciences (CBS), Mumbai, where he contributed to teaching in the Integrated M.Sc. program.

Dr. Pradhan’s research has been mainly in the areas of nuclear physics, physics education, mathematics education and science education. His current interests are students’ alternative conceptions in physics and mathematics, laboratory development in physics, students’ knowledge organization in science and capacity building of undergraduate physics students. A particular focus in of his work in physics education is studying students’ alternative conceptions in elementary thermodynamics and addressing them through activities. He has also been a keen worker in the fields of early childhood education and primary education.

Pradhan has published more than 60 research papers in nuclear physics and in science and mathematics education, and authored, coauthored or edited more than 35 books. He has guided several Ph.D. Students. Well-known for teaching, he has taught both at undergraduate and graduate level courses in core areas of physics, statistics for social sciences, research methodology, history and philosophy of science, ethics of science and science communication. As an award winning author in Marathi on science, Pradhan has written more than 100 popular science articles and as a sought-after speaker in the areas of education and science, he has given more than 100 lectures and radio talks. He has contributed to and edited textbooks and supporting material for National Council of Educational Research and Training, Indira Gandhi National Open University and Yashwantrao Chavan Maharashtra Open University. He has been a member of the Maharashtra State Vishwakosh (Encyclopedia) Nirmiti Mandal, for which he is currently the principal editor of their Junior Encyclopedia in Science and Technology.

Dr. Pradhan was the Vice-President of Marathi Vidnyan Parishad for eight years. He chairs the Programme Advisory Committee of the National Council of Science and Technology Communication of Government of India, which oversees the annual National Children’s Science Congress. He has been closely associated with MKCL as Chairman of the Steering Committee for Content Development, first under the Shikshan Pandhari Project and now under the Param School and Param University for Quality School Education Project. Since January 2013, he has been the President of Indian Association of Physics Teachers. He is also the President of Gram Mangal, a grass root NGO working in the field of primary education. He is a fellow of Maharashtra Academy of Sciences.